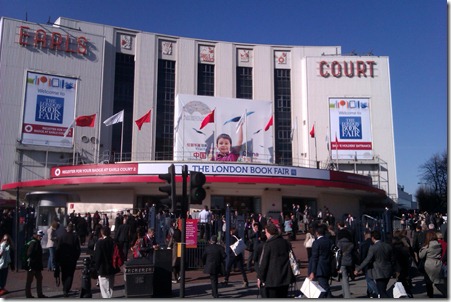 This year’s LBF was a vast improvement on previous years. An expanded digital zone sees the industry acknowledging the importance of digital publishing in all its forms. One particular growth area was an increased number of eBook aggregators, eBook conversion companies and the apps area. It was good to see Amazon showing their faces (literally) as this is usually such an anonymous company. So the opportunity to make contact and speak with representatives of the behemoth was refreshing. It was good to talk about what Amazon has been doing with its Select programme and how it really does not work in the favour of any publisher, small medium or large. Why Amazon insists on exclusivity to join a promotion to give away your publications is beyond me, especially when its platform only publishes the Mobi format. I can’t see the logic in denying publishers the chance to have their books simultaneously published on other platforms that use ePub. Its a spoiling tactic too far and one which if abandoned would not affect the Kindle sales one iota. Either Amazon must open up their platform to allow ePub or give up on this programme of exclusivity that does nothing except harm the cash flow by stopping eBooks appearing on other platforms. It will be interesting to see what Amazon’s response is.

Barnes & Noble had a presence in that they were sponsoring various areas in the digital zone and had a small stand to help with Nook conversions. It was interesting how tight lipped everyone was about the industries worst kept secret the Nook coming to Waterstones (Wook). Even Waterstones representatives were not confirming nor denying anything about the forthcoming collaboration.

One thing the LBF lacks is any form is a connection with the end user…the reader. The fair seems quite happy to continue blithely ignoring the most important factor in the reading equation and I do wonder if there is a way to include readers in the fair to help the industry prepare for the next few years in the exciting developments in publishing. If they are cut out of the equation don’t be surprised to find the continuing growth of self-publishing at all levels grow out of hand. The industry needs to work at all levels to ensure the value of books is not lost on the tidal wave of un-edited but enthusiastically self-published books being given away at Amazon and other sites. I am entirely for the democracy of this new era of publishing but there are unscrupulous fakes out there who are just churning out rubbish (some of it badly plagiarised) and cashing in very nicely while robbing many of only a few pence but selling thousands of copies. Sorting the wheat from the chaff is the biggest challenge facing both the reader and the publisher.

Talking of democracy, China were the focus country. It seemed half of Beijing was encamped in Earls Court. I do wonder who LBF will invite next…Zimbabwe, Rwanda, or Iran or another country will an equally exemplary record on free speech. While commerce with China is an increasingly important factor as we move forward in the 21st century; lets face it the traffic has been pretty much one way, with countries falling over themselves to get in to bed with China and precious little in return. Certainly not the individual rights of people in China. But don’t worry, as long as we are trading with them and they are out-pricing our workforce or making remarkably cheap (and similar looking) TV’s, computers or eReaders then all is rosy. Who cares about human rights or jobs in the UK. Oh and don’t worry about China’s mounting inflation problems (these will make Europe’s problems look like an end of day cash float miscalculation) worrying housing problems within its own property sector and massive environmental and waste impact. Because by the time we do it will be too late.

Overall though LBF 2012 was a success and a step in the right direction for publishing…albeit a small one.

Posted by Caffeine Nights at 20:02