The Cuckoo Who Squawked has them all of a Twitter

As news filters through that JK Rowling’s unmasking as the author of The Cuckoo’s Calling was from her lawyers’ it seems a little hard to swallow. If Rowling was serious about keeping her crime writing pseudonym of Robert Galbraith safe, you would assume everyone connected to the project would have been made to sign an non-disclosure agreement (NDA) with severe penalties for anyone found leaking the story or those connected to anyone leaking the story. Not wanting to duck the issue, this could look like a well timed PR stunt designed to do exactly what it has achieved and that is to sell a load of books after stirring curiosity. Will there be swift justice?

It really does beggar belief that the best friend of JK Rowling’s solicitor’s wife, would disclose this information on Twitter, let alone the fact that the trusted legal employee (Chris Gossage) would be so careless in the first instance to reveal the truth so casually. Stranger things do happen though. Would this happen at Penguin? Or is it all a PR lark? If true I dare say Ms Rowling is huffin and puffin as well as effing and blinding.

Having sold 1500 copies prior to the leaking, the book has now been reprinted with over 140,000 copies flying onto the shelves.

Ms Rowling is not naive and I cannot imagine she would have had no measure for recourse built in to keeping her identity safe. If this is not a PR stunt then we can safely assume that there will be consequences for Russells Solicitors, Chris Gossage who revealed the identity to his wife’s best friend Judith Callegari who promptly repeated it parrot fashion on Twitter – how ironic. If true, they must be feeling like a bunch of tits.

It certainly does make you wonder about the standards of legal professionalism, and whether Ms Rowling is appointing a new legal team to take action. I can already see them circling like birds of prey.

Posted by Caffeine Nights at 10:33 No comments:

A New Direction – This is the Modern World 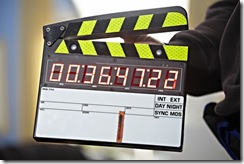 Recently Caffeine Nights announced a first look deal it has made with Richwater Films, an extremely vibrant and exciting British film production company, and I was drawn to thinking about the parallels between the digital revolution happening in both of our industries. Publishing and the film (or Movie) industry is being transformed and democratised by digital. I use the word democratised because that is exactly what is happening. Not only is digital giving greater access to people who would have been shut out of the old worlds of film and books but it is also transforming the way we are working. The advent of high definition cinema quality images shot through DSLR which can be purchased by companies rather than being on the treadmill of forever loaning equipment and buying film stock, let alone the worry of processing the shot footage and storage of negatives etc has been swept away with the new tide of digital. Digital in publishing means so much more than eBooks. It has affected every part of the book making process from design to the finished product. The same can now be said of the films you watch.

Quality, as ever will out but because something is new and presented from new sources it should not be dismissed. The democratisation I speak about also includes gaining access to creative input from people who would never have been accepted by the ‘old school’ and this is not just the working classes but bright young, middle aged and old film makers and publishers from different backgrounds, classes and ethnicities. This is the true democratisation. The ingress of digital is reaching many of our visual and audio arts. Beginning for me with photography and music before the tendrils of digital and advent of technology allowed publishing and film to join the club. I see digital as the new wave or punk revolution for our time and it is a breath of fresh air. It opens a world where ideas can be discussed more freely and investment in those ideas more attainable through the cost savings digital offers. This brings new art, and obviously here I am talking about books and film and all each encompass, to the masses.

Straddling the divide between publishing and film is the author or screenwriter. Authors like our own Dougie Brimson, who has carved a career in both industries through his bestselling books like The Crew and Top Dog, selling thousands of copies and writing screenplays for features such as Green Street starring Elijah Wood and the forthcoming screenplay of Top Dog from his own novel for Richwater Films. Dougie is a prime example of an author who has capitalized on digital in both industries through talent, hard work and determination.

This digital era defines success in different ways and offers different channels for success. While it is great to have film distribution to a network of cinemas or book distribution to a network of book shops it is no longer necessary for that to happen to have a hit on your hands. There is an eager audience devouring new digital content. At Caffeine Nights and Richwater Films we are lucky to be working in both the traditional and new world of distribution. Our books will be available in stores as well as online. Films such as Richwater Films up and coming ‘Vendetta’, starring Danny Dyer and Vincent Regan will get a theatrical release (through distributor Anchor Bay) before it reaches the consumer shelves as a DVD, where it will be seen by many thousands of viewers and of course eventually online.

The book industry used to sneer at entrepreneurial authors who went down the self-publishing route and called it ‘vanity’ publishing. Now it has a new respect through the sheer force of numbers in sales it commands with some authors. The film industry is also battling with an entrepreneurial spirit that is embracing digital, those roughneck mavericks with their low budget features and guerrilla style film-making techniques. Arguably some of the output may be less slick than their big rich cousins and I really do mean arguably - in some cases it’s difficult to tell the difference between a £1m pound movie and a £30m pound movie - but it is also fresher and doesn’t feel as sullied or tainted by a corporate shroud which often stifles originality and creativity. It is this democratisation that frightens the establishment .

Digital is the common factor that drew Caffeine Nights and Richwater Films like magnets to work together - combining our talent pool so each can benefit. I am equally sure that other arts have been brought together in similar fashion. Without this revolution neither company would exist, or at least not in the way they do today. We have chosen to ride the technological new wave flowing through our respective industries and seize the opportunities each is presented with. It is without doubt one of the most exciting times to be in publishing and film making in the UK ever.

Many years ago Paul Weller wrote “This is the modern world, we don't need no one to tell us what's right or wrong” For me this sums up the democratisation of digital.

Posted by Caffeine Nights at 07:35 No comments: