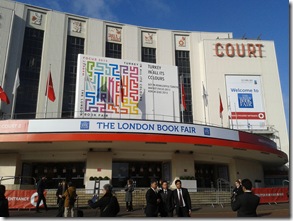 Study the photograph and then compare it with my report from previous years. You will be hard pushed to spot the difference and that is exactly what visiting this year’s London Book Fair was like. Many of the seminars were not just similar, they were the same. And the ones that were not were often shocking in the content within. It was a kinder surprise moment where you have eaten the chocolate only to find that you swallowed the toy too. One talk, I believe this one must have been entitled ‘How to Suck Eggs’ or was it ‘More of the Bleeding Obvious’ I can’t remember which, gave a blow by blow account on how to get published; yet offered nothing in terms of really useful information. I also witnessed word for word and slide for slide repeats from 2012 or was it 2011…they seem to blur. However it held the audience spellbound as they excitedly scribbled every word down as though from the mouth of a messiah. I did wonder when they reviewed those notes if they would find a picture of a naked king.

The digital zone is by far and away the most exciting area at the exhibition but even this year it was dull and uninspiring apart from one or two exceptions. Yet all the major players were there – Amazon Kindle, Kobo, Sony, Samsung and even Barnes & Nobel with its Nook. For those of you who visited and did not find Barnes & Nobel, there is a very good reason. They were in fact hiding in a room with virtually no signage. I am not sure what their strategy was but for the most part they remained locked in a room having private meetings. I did manage to speak to them about various topics Nook related and was pleased to get some answers. The main obstacle for British publishers wanting to get on their platform being B&N’s insistence that British publishers must have an American bank account and that means a US residency. They seemed shocked to learn this and promised to look into it.

Kobo took centre stage this year stepping up the battle to be notice by just about being everywhere in Earls Court 2. Having chosen LBF to launch the Kobo Aura HD eReader it certainly wasn’t going to waste the opportunity and the Kobo stand was pretty packed for most of the exhibition. Amazon were friendly and ready to be engaged but not too prepared to impart much of any use in terms of information regarding promoting books on its platform apart from the horrendous Select program.

The big thrill for many was getting your hands on an M&C Saatchi ‘Books Are My Bag’ bag. This pretentious little bit of fluff was being hailed as the saviour of the print trade and retail alike. Only time will tell, but it kept the ‘Rodney’s & Lucinda’s’ very happy as they strolled around LBF with it slung over their collective shoulders. I do often wonder who these campaigns are aimed at and if they may be missing the target.

There was some good software solutions from EasyPress with Atomik ePublisher an online solution for editing and converting word docs to InDesign files. Sadly the pricing for access to the software makes it only viable to large publishers or certainly publishers with deeper pockets than mine.

The big debate on Monday was ‘Amazon – Good Guys or Bad?’ It’s too late guys, the horse has already bolted on gossamer wings. Trying to control it now is like trying to fight a bush fire with a thimble of water. The publishing industry needs to join forces to stop participating in 20 pence promotions and marketing tools such as Kindle Select and seriously look at pricing of eBooks to nurture a market willing to pay a decent price for digital content. The same goes with printed books. If publishers really cared about book stores it would spend more time reducing print runs and not supplying supermarkets with overstock paperbacks to sell for  £1 and less time kidding themselves that books really are their bag.

One thing that I always find disappointing is the lack of presence from our only serious retail chains Waterstones, WHS and to a lesser extent Blackwells and Foyles. Surely this show should present a chance to speak with publisher and authors alike to gain an on the ground overview from the trade.

LBF needs shaking up and 2014 will probably be the last time the show is held at Earls Court as it prepares to be bull dozed and make way for housing and shops – maybe even a book shop. So 2015 should present the perfect opportunity to re-invent this show as it prepares to find a new home. Let’s hope so…