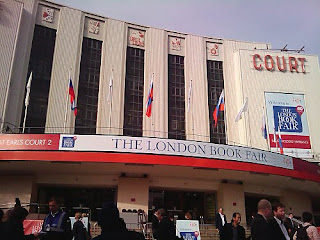 So the London Book Fair is over for another year and I have to report that it was a far better fair than last year, though that comparison is like telling a man who has just lost his leg that you have been able to sell his shoe. The numbers were back and so was a genuine buzz. The IRC had a constant flow and deals were being negotiated not just in the IRC but also in the many cafes populating Earl’s Court.

But what were the hot topics of the show, what was the headline grabbing advance in publishing? For me there was only one clear evolution and that is still digital, especially the forthcoming arrival of ePub3.0. There were a number of seminars dealing with the development of the platform and fortunately most of them delivered in clear and concise language.

The key benefits for publishers with ePub 3 will be the ability to have multimedia rich eBooks with ePub able to host and stream video and audio content. This will have many clear advantages and open a world of possibilities. My main concern here though is for fiction publishers not to lose site of the fact that content is king and no matter how many fancy videos you incorporate readers still want a good read. We must never lose focus that it is the words which are and always will be the most important aspect of a book be it paper or digital. So, while great it is a tool we must use with caution and creativity. One of the other areas of improvement with ePub 3 is the ability to use Scalable Vector Graphics (SGV) files with greater ease. Though SVG’s have been around since 1999 they have not fitted well with ePub until now. The new version will bring a greater dimension to the graphical layout of ePubs. Clearly one of the big sectors to gain from ePub 3 will be magazines and non-fiction publications both of which can incorporate the two key developments.
Another step forward has been ePub 3.0’s improved metadata which will enhance text to audio features and help define key attributes of titles for better search parameters.

Bill McCoy from the International Digital Publishing Forum (IDPF) gave an excellent presentation which I hope will be made available online.

There still appears to be an element of the gold rush with eBooks and apps, and many companies are clearly cashing in. One stall in the digital zone was selling its CMS app generating system – a cloud based app generator. All you do is upload your files to a predefined template and hey presto...one app. The software was simplicity itself and frankly my hamster could have generated an app using it so bravo to the software designers. Now before you all go rushing off to Google this company (who shall remain nameless) check your bank balance first. I was told that to produce one app using this remarkably simple software would cost...wait for it...£10,000 per book. I am glad I turned down the free offer of a ‘celebration’ sweet as I may well have choked on a mini snicker, though to be fair as I walked away I did have a major chortle. Maybe there are publishers out there desperate enough to jump on the next digital bandwagon but 10k for a crummy app is serious wedge and you are so very not likely to see anywhere near close to a return on that investment.

The next ‘big thing’ is going to be a glut of ‘social media specialists’ promising to elevate your books from the mire to the stratosphere. Two specialist companies were encamped in the digital zone, both of which were actually offering very good advice. Clearly many publishers require help with social media and also with traditional media. I watched amused as a packed seminar filled with publishers and authors alike scribbled in their notepads devouring the nuggets tossed from Gareth Howard of Authoright PR. Gareth talks a lot of sense and while a close observation of the content reveals nothing new or startling it was the response by the eager audience which clearly shows that there is an audience willing to pay handsomely for this sort of expertise. I would not be surprised to see a number of new companies eager and ready to mop up here, it will be interesting to see if the 2012 LBF shows an increase here.

There was the usual strong contingent of companies from China, India and Russia this year being the market focus. Once more there was not much new or startling from these areas. There was a marked reduction in companies selling proprietary eReaders. This may also be a case of a maturing market or one consigned to the dominance of Amazon and Apple in the market.

In summary, the LBF 11 was a success in a very challenging market. There was a palatable air of optimism, who knows if this was real or naive and wishful thinking but it was upbeat, positive and a huge step in the right direction. ePub 3 will launch later this year, July has been mooted but we will wait and see. One of the positives from Bill McCoy was that ePub 3 is an ongoing project and that we are not immediately going to rush to a new ePub 4.0 platform. This will be a genesis which evolves rather than a rewrite of the format, which for publishers, authors, and readers is excellent news.
Posted by Caffeine Nights at 21:45