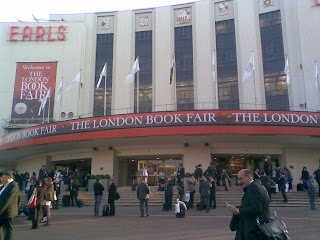 It was fair to say last year's London Book Fair was a disappointment on a number of levels, the chief one being that I saw an industry which was ignoring all forms of digital publishing. I saw an industry that was happy and content with itself (with no good reason) and the sad fact was that if you wanted to find any nod toward publishing in the 21st century you had to search really, really hard. What a difference a year makes. Maybe it is these recessionary times or maybe it is just that the sleeping giant has finally awoken but new digital technology was no longer hiding in the shadows. Like a gay uncle at a wedding it was out, proud, and reasonably loud.

It would be unfair and hard to judge exactly what the biggest single development was but for me as a publisher using Print On Demand (POD) it must have been seeing the Espresso Book Machine up close and personal. The exciting development being Blackwell's decision to purchase one of these fantastic machines and put it in their flagship store in Charing Cross. The machine has a much reduced footprint from earlier version and something which the makers 'On Demand Books' assure me will get even smaller over the coming years. It is without doubt impressive watching the machine print, cut, glue, bind and trim a book in front of your eyes in around five minutes. Even more exciting for customers of 'Lightning Source' (LS) is the agreement signed between On Demand and Lightning Source which will roll out to LS customers first in the US and then here in the UK soon after. What this means is that wherever you see an Espresso in a consumer outlet you will be able to print fresh copies of LS printed books as quickly as it takes to make a cup of coffee.

EBooks have really raised their game in the past year and the London Book Fair reflected that with an area set aside for digital publishing. It would appear that the industry is also recognising the fact that it is not enough to just build fantastic looking eBooks with multimedia functionality but also to start addressing distribution issues. One company whose software I personally like is Australian company DNAML who Desktop Author program is one of the slickest and easiest pieces of software to make excellent eBooks. Their decision to exhibit at the show comes at a time where there are more exciting developments happening to the software they develop and to the websites and platforms they are offering publishers and authors alike.

Other areas of interest are the mobile phone publishing platforms and it was good to talk to a couple of companies already advanced with their technology. One in particular, mobilebooks.com run by Austrian company, Blackbetty, is only months away from launching a new digital platform in the UK. Blackbetty is already in advanced discussions with major retailers in the UK and expects to roll out it service to retail outlets via its Bluetooth pods by 2010. Canadian company, Indigo, already have an integrated system which downloads eBooks to mobile phones over a variety of phone networks and the openness of discussions between these companies and willingness to talk about each other's platforms was refreshing and healthy.

On an entrepreneurial level there were companies offering promotional services for mobile and digital publishing. Dark Tower Solutions for instance provides a platform to deliver messages to an audience via short code text numbers. This offers publishers an opportunity to drive readers to their product via unique content such as authors reading chapters of their latest titles or short interviews or sample chapters, in fact anything which can be sent to the recipients' mobile phone.

Last year I left the show somewhat depressed and not overly optimistic for the future of publishing, this year, even in a recession, I have left the show with a renewed sense of hope. EBooks are being accepted, the public is becoming aware that they can read novels on mobile phones and eBook readers such as the eReader, Kindle or even the BeBook. POD it would seem is no longer a dirty word in publishing; in fact it is a clean, green word and being accepted by all publishing houses as a way to meet the demands of a changing publishing world. Let's hope the next twelve months sees continued development and acceptance.

Posted by Caffeine Nights at 20:04