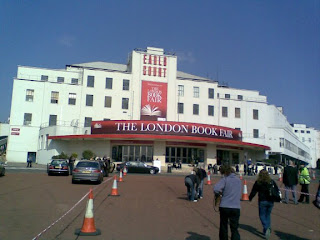 If there was a buzz sweeping through the London Book Fair (LBF) it was the quiet gentle hum of indifference. I was expecting to attend an invigorating and lively event in a industry that is being challenged with new technology, communication and delivery methods but there was scant evidence of an industry even beginning to address these issues. Or if there was the industry was talking behind closed doors or within the hallowed and expensive closeted rooms above the main exhibition in the seminar rooms. Unlike many industry fairs, the publishing industry not only likes to charge a premium for entry to the exhibition but add a surplus tax to attend many of these industry talks, which is a great shame as I am certain that behind the closed doors there must be something of interest happening. What I did find on the main exhibition floor was an industry comfortable with itself. There was very little in the way of emerging marketing tools or the cutting edge technologies that are going to play such a prevalent part in the industry in the coming years.

Microsoft was plugging its 'Live Search' technology and Print On Demand was given a passing nod with Lightning Source occupying a busy stand, but I was pleased to find one stand bringing book content to a new and younger market via mobile phones. This technology is already big in Japan and is coming to the UK via Austria. The reason for its success in Japan could be that fiction is currently having a hard time with the established core groups of male readers in particular who are favouring business titles. Mobile downloads of novels through Bluetooth applications is a way to introduce fiction to a younger more net savvy audience. The technology uses special fonts to make reading on a small screen easier with less eyestrain. Having downloaded a trial copy of Edgar Allen Poe's 'The Black Cat' and read a few pages on my Nokia 6300, which does not have the world's largest screen, I can say the technology works and provides publishers and authors a new route to market. Okay, so maybe a reader may or may not read a whole novel on their mobile phone but teaser chapters and the ability to read a novel in its entirety may lead new readers into bookstores or onto the web to purchase a physical copy.

Speaking with Jorg Hotter from Black Betty Mobilemedia, who specialise in this mobile phone technology it is clear that if the industry embrace this method of delivery then there is a cheap and viable alternative to deliver fiction to market using existing hardware and not reliant on purchasing expensive equipment such as Amazon's Kindle. The Kindle is without doubt one of the more exciting developments in the industry, though at present a costly investment for the average reader and currently unavailable in the UK. Mobile phones are ultimately portable and a piece of equipment that virtually everyone in the UK has access too. Mobile digital rights are going to be a growth area and certainly something literary agents will be brushing up on.

There can be no denying the usefulness of the fair; it is a great place to meet industry insiders if they are prepared to meet with you. This is easier said than done however, and using the LBF online diary system to pre-book meetings even months in advance can draw no response from the invitee. Which is a shame when the whole system is electronic and it takes nothing but a little time to respond with a polite ‘no’ rather than keep a person hanging on for months in the hope of a positive answer; but as you know the book industry is well-versed in doing that. So the large area on the second floor becomes home to literary agents holding meetings with existing clients and excluding any interlopers from the outside world. The café areas on the fringes (which is an apt metaphor) appear to be the place where the real meetings happen. Maybe this is the transition area for new talent; if they survive here they progress to the inner sanctum.

To the casual observer the UK publishing industry still appears to be run by Oxbridge, there is nothing wrong in that if they are best qualified to do so, but one senses that the air of exclusivity which is so common in the industry, is also the thing which could be its downfall. Anything that changes or challenges the safety of this world is looked at with sceptical eyes. If something is not equal too or on par with its ideal, education or prejudice it is deemed a threat.

There are many exciting things happening within publishing and I draw parallels with what happened to the music industry in the 1970's when a small but significant core of people grew tired of the same old record being sung by supergroups, such as the Eagles or Queen. From the streets came what at the time many thought was a revolution called punk rock. History though shows us that there are few, if any, real revolutions in art or entertainments just evolutions. Sometimes the leap is a little large, maybe it misses out a generation and that is what can be frightening to the establishment. Are we in the midst of a revolution…no, but the industry is evolving and the leap ahead of it looks big.

Posted by Caffeine Nights at 19:40

YES! I absolutely and wholeheartedly agree with you about the mobile content aspect. What bugs me though is that I've been pushing it as a potential medium since 2004, only to be met with a wall of apathetic silence. Why can't publishers see the advantages and push a little of their huge marketing budgets into promoting mobile content? After all, it really isn't rocket science and there's so much to gain..