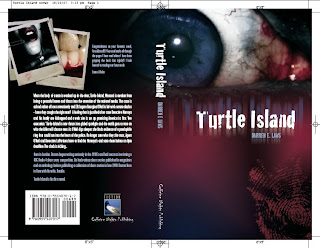 
Caffeine Nights Publishing is proud to announce the launch of its first crime fiction novel, Turtle Island, by Darren E Laws. Originally published in 2003, the novel has been re-edited by Darren after fans of the book asked for a sequel. The rights having been obtained by the Kent based publisher means it can proceed to publish the whole series of books in the Georgina O’Neil trilogy.

Author, Darren E Laws originally published the book with an American publisher and was keen to expand the novel into a short series of crime fiction books. “I have spent a good part of this year working on a re-edited version of Turtle Island. It strikes me that software developers and even film makers are always modifying and improving their product and I do not see why authors cannot do the same.”

Originally Turtle Island was penned as a stand-alone novel, but due to pressure from fans to find out what happens to various characters in the novel, Darren began to draft a sequel ‘Dark Country’ (due for release by Caffeine Nights Publishing late 2008).

“Various elements in the original publication had to be re-edited to allow me a little more scope for the sequel. There are some subtle changes in the novel, and I would like to think that I have upped the tension; chemistry and horror to make TI V2.0 not only a better novel, but also one that makes the readers want to find out what happens in the sequel ‘Dark Country’.”

Based in Kent, publishing contemporary and crime fiction. We aim to make you laugh, thrill you, scare you, have you on the edge of your seat with your fingers gripping the pages tightly, but most of all, we want to entertain you with fiction aimed at the heart and the head…

Born in East London, Darren E Laws now lives in Kent with his wife, Natalie, numerous goldfish and a hamster. Currently sampling every form of Whisky available, Darren divides his time as a public relations manager and a nighttime novelist.

Turtle Island is the second novel from Darren E Laws. The first novel ‘Tripping’ was a surreal black comedy published in 2007. ISBN: 0955407001

When the body of a man is washed up in the river; Turtle Island, Missouri is awoken from being a peaceful haven and thrust into the attention of the national media. The case is solved rather all too conveniently and F.B.I agent Georgina O’Neil is left with severe doubts - have they caught the right man? A feeling that is justified after case Detective Montoya and his family are kidnapped and a web site is set up promising America its first live execution. Turtle Island is now thrust into global spotlight and the world gets to vote on who the killer will choose next. As O’Neil digs deeper she finds evidence of a paedophile ring that could run into the heart of the police. No longer sure who they she trust, O’Neil and case partner, Detective LaPortiere, have to find the Montoya’s and save them before an 8pm deadline. The clock is ticking…
Posted by Caffeine Nights at 18:11